When shopping for a new flashlight, one of the most important factors to consider is its lifespan. Flashlights are frequently used in emergencies, so you want one that lasts a long time because you never know how long you'll need it. Many flashlights available in stores and online do not specify how long they will last — here's our guide to help you get a better understanding of the flashlight's lifespan, and 8 important tips to help you extend the lifespan of your flashlight or headlamp.

What is a flashlight mainly composed of?

The following are the main parts: 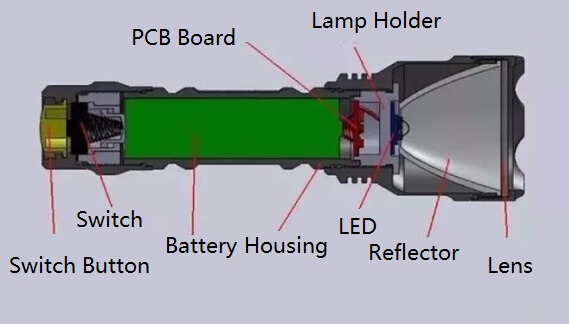 What are the main factors that influence the lifespan of a flashlight?

The driver circuit is the most common cause of led flashlight failure. This is the part most likely to fail other than switches on most lights. It's a small circuit board packed with components that serve as the LED's power supply and voltage/current regulator.

The failure can be caused by poor soldering quality, defective components, and poor circuit design. Even potting compound used to solve vibration issues could cause problems if its thermal expansion characteristics aren't a good match for the driver board's operating temperature. A good LED driver should last for at least 10 years; after that, a variety of factors such as the environmental aging of the plastics and insulators used in the board components come into play.

FreasyGears understands the importance of a high-efficiency and reliable circuit for a flashlight as a team of innovators and manufacturers of high-level flashlights and headlamps. All of the aluminum alloys we use are aero grade with excellent thermal conduction. All of the lights come with a CNC machined unibody design. Furthermore, all FreasyGears lights use intelligent circuits to maximize performance while avoiding overheating, ensuring high efficiency and reliability in two ways:

When the light work on the Turbo mode for a few minutes, it will automatically switch down to a lower level to avoid overheating. 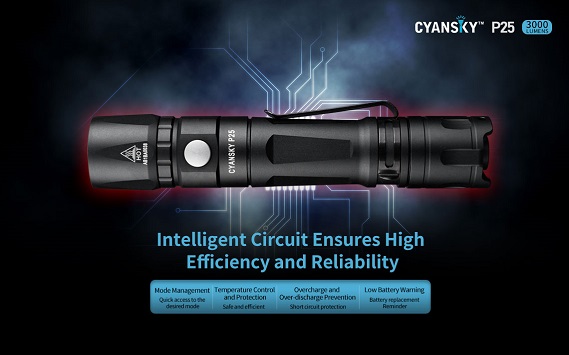 In a traditional incandescent lamp, the light is produced by heating a filament in traditional bulbs. This filament becomes hotter and weaker over time, eventually snapping.

LEDs, on the other hand, do not have a filament and instead generate light through the use of a semiconductor. Furthermore, most premium flashlights use high-quality LEDs with a lifespan of over 500,000 hours, such as CREE or Luminus. A 50,000 hour LED can be left on 24 hours a day, seven days a week for six years before it needs to be replaced. 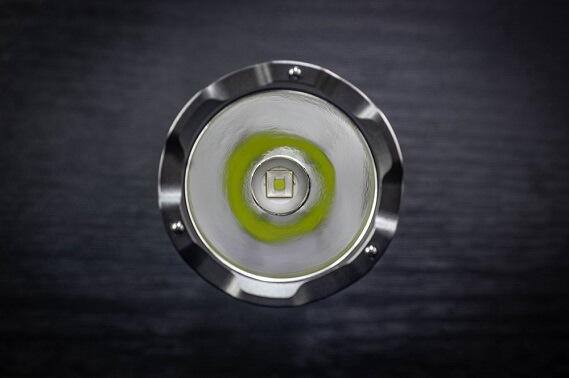 Although LED bulbs will gradually dim over time until they stop producing light entirely due to lumen degradation, most LEDs have an L70 rating, which indicates how many hours the bulb will last before it loses 70 percent of its initial light output.

Furthermore, even when comparing two lights side by side, the human eye may struggle to detect a change in output of less than 50%. As a result, in addition to being more energy-efficient and reliable, LEDs are, as you can see, an extremely long-lasting solution.

Actually, HEAT is the real killer for LEDs in otherwise solid lights. Especially on the smaller lights, LEDs still put out enough heat that without adequate air movement over the metal body of the light the heat builds up and can damage the LED. Many modern flashlights are being designed to put out the maximum output in the smallest size, which is fine as long as you only run the light in max for a short period at a time. With exceptional heatsinking to the light body, the LED will usually be fine, but this is where a lot of the cheaper manufacturers cut corners when building lights. (no thermal compound between the LED/body of the light, non-thermally conductive PCBs, etc) Back in the day when some premium manufacturers were just starting to get popular, they had this issue with their lights on turbo mode, the quality was fine but the lights were just too small to handle the heat buildup when set to turbo and left sitting pointing at what someone was working at for an hour. That learning experience has led to lights having better thermal protection built into the drivers that automatically reduce the output when an overheating condition is detected. That’s why FreasyGears gives so much attention to the overheating protection system, which is really helpful to extend the lights' lifespan while keeping the high lumens.

Some flashlights in the market are conducting electricity through the thread. In this case, the white thread is aluminum that has not been anodized. Since aluminum is quite soft, a hard twisting may cause the screw failure and the housing destroy, especially if it is not aligned. Thus, to protect the thread, please lubricate it regularly, but be careful not to affect electrical conductivity with too much lubricating oil.

To keep the maximum reliability and make our lights easier to be maintained, FreasyGears makes conducting electricity through the end surface, which will avoid failure caused by poor contact after thread abrasion for a long time. 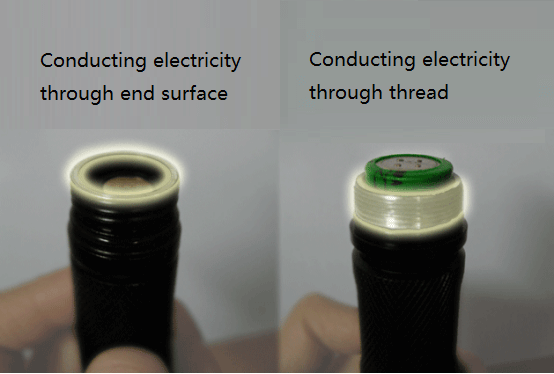 The flashlight is installed in a relatively dry and dust-free environment. Dust may enter if it is frequently opened, which will affect the luminous effect. In addition, please do not attempt to clean the reflector with any tool. Cleaning will only make the reflective effect worse, if accidentally contaminated, please keep it as it is.

Some parts may become loose as time passed by, especially the tail rubber root. In case it happens, you can insert the two legs of tweezers into the hole. All metal parts of the flashlight should not be disassembled except the tail switch without knowing its principle and circuit, otherwise, it may cause unnecessary disconnection.

4. Keep your flashlight free from overheating

Heat is generated during the flashlight working, so cooling is necessary. A good heat dissipation flashlight should feel the heat within 1 minute after it is lit up. The heating part and other parts are well-distributed, and the whole metal shell has heat. If the high output is on for an extended period of time, try to keep the flashlight in motion so that the air flowing through the housing carries heat away. Especially in summer or in a closed environment, pay attention to avoid scalding. Generally, the shell does not exceed 60 degrees. In summer exercise conditions (e.g. cycling), do not exceed 50 degrees.

Heating is not always bad, check here for more details if you are interested in knowing why. Thanks to the intelligent circuit system, all lights from FreasyGears would work automatically to balance the heating and performance.

5. Use your batteries safely

Again, any battery needs to be safe. First, lithium battery charging voltage can not be higher than 4.25V (4.35V high voltage type exception), battery discharge cut-off voltage shall not be less than 2.5V, for conservative should not be less than 2.8V; Otherwise, there is the risk of explosion when charging higher than 4.3V, and the risk of battery scrap when discharging excessively. In addition, the battery can not work under the condition of high temperatures, which also needs to be considered synchronously with the heat dissipation of the flashlight. Bad heat dissipation of the flashlight may cause the local temperature of the battery to be too high, which is also very dangerous. 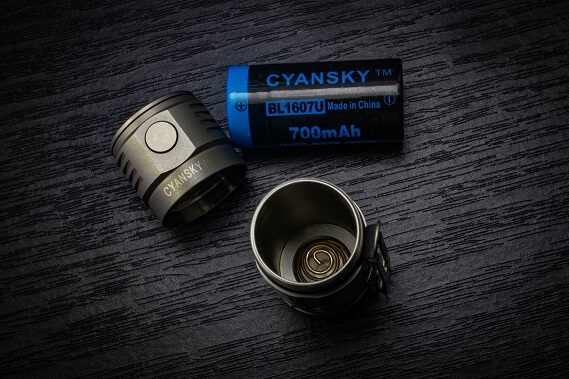 6. Keep your batteries in a good condition

7. No exposure to the sun

To keep it working, there are three basic steps – cleaning, replacing, lubricating and regular checking.

One of the most important things you can do to keep your flashlight in a good condition is to keep it clean. The bulb/lens area, handle, and battery housing shall be all included. Wipe down the flashlight with a microfiber cloth or an alcohol swab. If you have a flashlight with a lot of ridges, you should probably clean the grooves with a soft toothbrush. Do this after each use, or every few uses.

In the event that you don't invest an excess of energy in the area where you continually get grimy from your feet to your eyes, then, play out these flashlight care steps at least once a year. Nonetheless, assuming that your light is used in the areas covered with oil, sand, water, mud, or any type of soil, then, you shall do this around once per month, or after each use.

The O-Rings are one of the most important but fragile parts of your flashlight. They keep mud, dust, and water away from your light by making it waterproof. Thus, timely maintenance is critical for their good condition. It is preferable that you check that our O-Ring has not dried out or cracked, and if you find it to be scratched or in poor condition, it is time to replace it. If you notice that the O-Ring has broken, please just replace it with a new one. FreasyGears includes a spare O-Ring for each light in the package. However, if it only appears to be dry, you can continue to use it after applying some O-Ring lube.

Just as it is critical to keep the torch clean, it is also important to check parts and lubricate the light as needed. There are several parts of the flashlight that can dry out. O-rings are the components that prevent water from entering the flashlight's housing and light casing. It is far more cost-effective to lubricate the O-rings every six months to ensure that the case remains secure and the springs continue to function properly.

If the discharge time suddenly decreases during use, it is likely that at least one battery in the battery pack has broken, plate softening, plate active material has been removed, or another short circuit has occurred. At this time, professional battery repair institutions should be contacted in a timely manner for inspection and repair.

In the event that you don't invest an excess of energy in the space where you continually get grimy from your feet to your eyes, then, at that point, playing out these flashlight care steps ought to be done at least once a year. Nonetheless, assuming that your light is used in the areas covered with oil, sand, water, mud, or any type of soil, then, you shall do this around one time per month.

Previous : How to choose the right headlamp for your needs? Next : Buyer’s Guide for the Best Hunting Flashlights
Related News